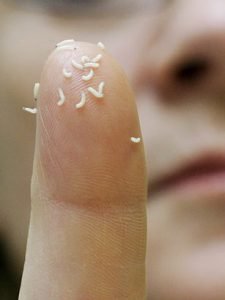 Maggots – You may one day depend on this bug to save you from an even greater one.

Maggots have been known for centuries to help heal wounds. Military surgeons noted that soldiers whose wounds became infested with maggots had better outcomes than those not infested. William Baer, while at Johns Hopkins University in Baltimore, Maryland, may have been the first in the Northern Hemisphere to have intentionally applied larvae to wounds in order to induce wound healing. During the late 1920’s, he identified specific species, raised them in the laboratory, and used their larvae to treat several children with osteomyelitis and soft tissue infections. He presented his findings at a surgical conference in 1929. Two years later, after treating 98 children, his findings were published posthumously.

MDT was successfully and routinely performed by thousands of physicians throughout the 1930’s, but soon it was supplanted by the new antibiotics and surgical techniques that came out of World War II.

Maggot therapy was occasionally used during the 1970’s and 1980’s, but only when antibiotics, surgery, and modern wound care failed to control the advancing wound.

However, with the emergence of antibiotic resistant “superbugs” such as MRSA, maggots are once again on the front lines, leaving no dead tissue behind.

Biology of flies and maggots

Maggots are fly larvae, or immature flies, just as caterpillars are butterfly or moth larvae. Maggots do not appear all by themselves (“de novo”), as was believed 150 years ago; they hatch from eggs, laid by adult female flies.

Those flies whose larvae feed on dead animals will sometimes lay their eggs on the dead parts (necrotic or gangrenous tissue) of living animals. When maggots are infesting live animals, that condition is called “myiasis.” Some of those maggots will feed only on dead tissue, some only on live tissue, and some on live or dead tissue. The flies used most often for the purpose of maggot therapy are “blow flies” (Calliphoridae); and the species used most commonly is Phaenicia sericata, the green blow fly.

In 1995, a handful of doctors in 4 countries were using MDT. Today, any physician in the U.S. can prescribe maggot therapy. Over 4,000 therapists are using maggot therapy in 20 countries. Approximately 50,000 treatments were applied to wounds in the year 2006.

In January 2004, the U.S. Food and Drug Administration (FDA) began regulating medicinal maggots, and allowed the production and marketing of one particular strain of Phaenicia sericata larvae marketed under the brand name Medical Maggots (TM). In February, 2004, the British National Health Service (NHS) permitted its doctors to prescribe maggot therapy. Patients no longer have to be referred to one of a few regional wound-specialty hospitals to get maggot treatments.
There you have it – an usual and stomach churning treatment being relevant for use today. Who would have thought that something from the middle ages would help people in this century?

I hope you have enjoyed reading this article and you’ll join me for more acupuncture and non acupuncture related articles in the future.